We talk to you about them a lot, we often thank them: our donors. But at the end of the day, who are these people who are not only very generous, but also dedicated to philanthropic activities? Portrait of a new foundation based in Geneva, sponsor of the Co3libri project, with insight from its founder, Mrs Sylvie Tuor.

“Michel Tuor, my husband, has spent his entire career in Geneva. While his success has allowed us to provide for our children’s future, what he has given us above all is the financial means to help others. It seemed to us only natural to share, and indecent not to do so,” explains Sylvie Tuor. “We were already in the habit of making donations, only in a disorganized way. We wanted to structure our actions, which is why, at the end of last year, we set up the Hubert Tuor Foundation.” A freshly minted foundation therefore, swelling the ranks of a very close-knit philanthropic network in Switzerland (with nearly 13,000 foundations recognised as beneficial to the public), particularly in Geneva (where there were more than 1,100 foundations in 2012, including 53 newly created in that year alone).

A mark of generosity

The Tuor family foundation bears the name of Michel Tuor’s father, both as a source of inspiration and as a homage. “He was a person filled with goodness, altruism and generosity,” continues Sylvie Tuor, “We wanted to do something in his likeness. Originally from Graubünden, he worked all his life in the hotel trade. But in reality, he didn’t have the means to study the subject that was close to his heart: architecture. We decided therefore that one focus of the foundation that bears his name should be to support people who wish to study.”

Setting up a foundation

Managing a “big heart” calls for a degree of organization and discipline. “We didn’t want to be just another foundation, and so in the year prior to setting up the foundation we devoted lots of time and energy to identifying genuine needs. We had to have a focus for our activities. We chose education, training and research as the framework for projects in the fields of medicine, science and technology, both in Switzerland and abroad.” Projects are financed according to their appeal, and Co3libri is one such project.

The first few months have been very busy: without any publicity, the Hubert Tuor Foundation has already received many requests. “For now, I would say we are still on a learning curve. I spend around 40% of my time in the foundation. While it rests mainly on my shoulders, all the family is involved: my husband, my mother-in-law and my daughters. The latter will perhaps be willing to take up the torch later and seize this opportunity to share.”

Coming from the world of finance, the Tuors are familiar with the concept of return on investment. In their case, it’s not simply a question of giving for today, but of building for the longer term, with a view above all to ensuring that beneficiaries, if and when they can and in one form or another, give back in turn what they have received. “This is the concept of renewable philanthropy. Either the project generates profits which are reinvested in new projects, or the beneficiary, at some point and in one way or another, gives a helping hand to the foundation by returning the favour.” Meaning in a sense that generosity travels full circle, becoming the gift that keeps on giving. 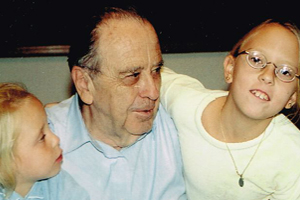 Hubert Tuor, whose generosity inspired the foundation of the same name.