Bruno Jelk, an exceptional man who cares for Nepal

Bruno Jelk has dedicated all of his life to saving other people’s lives. The Hubert Tuor Foundation wishes to work alongside him by contributing a part of the financial support needed for his projects, as was recently the case in Nepal.

Bruno is a native of Fribourg, but an adopted citizen of Valais since the time he first came to this canton at the age of 16 for training as a border guard. After that, he never left and he discovered his vocation as a mountain rescuer in the shadow of the Matterhorn.

Today, at the age of 70, Bruno Jelk is a reference figure in the field of mountain rescue, both for his expertise in helicopter rescue missions and for his determination in promoting his inventions, which include a special stretcher and a tripod winch used for lowering a rescuer into deep crevices to recover victims.

From the Matterhorn to Nepal

Thanks to Bruno Jelk, helicopter rescues developed quickly in Nepal and, for the specific purpose of providing the necessary training to Nepalese rescuers, the “Alpine Rescue Foundation, Zermatt” (ARF, Zermatt) was established in 2011, as a joint project of Rettungsstation Zermatt and Air Zermatt. Thanks to this initiative and the valuable help of Bruno Jelk, ARF’s Vice-President, Nepal now has its own independent, operational and effective mountain rescue team.

To improve the effectiveness and safety of high mountain rescue missions, the need to establish closer links between the rescuers and the medical teams operating in Lukhla soon became evident. This collaboration led to the launch of a larger project: LUHMA (Lukhla Helicopter Medical assistance).

During Air Zermatt’s latest mission in Nepal, we set up a local rescue system. Now we want to do something more for the local population that welcomed us with open arms, he said in 2011. Since then he has pioneered a helicopter route to supply isolated villages with food.

A region in diree need

Since April, he and his team have stepped up their missions in the most remote villages, like those located in the Tsum Valley, to which all access by road had been cut. In some villages, all of the houses had been destroyed and the people had lost, not only their family members, but also all the few possessions they formerly had. Thanks to the helicopters flown by Bruno Jelk’s team, supplies and first aid are now reaching these poor isolatede people.

Thus, over a number of weeks, the village of Kergia has been supplied with 800 kg of food and solar panels, the village of Chhekampar has received 4000 kg of basic supplies, the hospital in Lukhla has brought its laboratory back into operation, and the Rachen Gompa monastery has received five deliveries for a total of 3000 kg of food, 500 kg of clothing and 800 litres of kerosene for distribution to nearbye villages.

Bruno Jelk’s determination does not lessen with the passing of time, and the same is true for the Hubert Tuor Foundation! That is why FHT continues today and will continue tomorrow to support the initiatives of this exceptional man in its efforts to help those who need it most. 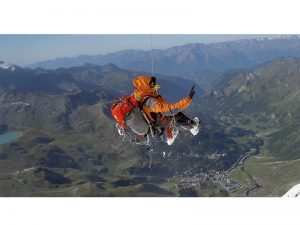 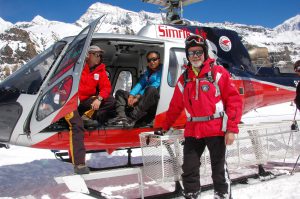 Bruno Jelk and his team, on board the helicopter.

A member of the local rescue team.